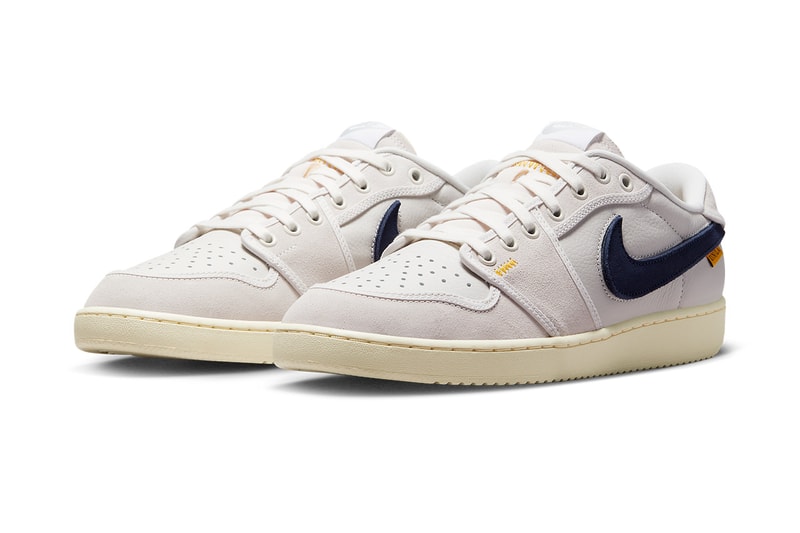 Chris Gibbs and his team over at Union LA have been making waves in the sphere of footwear thanks to their slew of captivating collaborations with Nike and Jordan Brand. And the Los Angeles-based retailer is aiming to further build upon this momentum in 2023 by starting off the year with an Air Jordan 1 KO Low capsule, marking this the first-ever Air Jordan 1 KO Low offering and team-up. A canvas pair has already been floating around the Internet, but now we’ve got an official look at a new iteration that zeroes in on a leather build.

Much like its sibling, this iteration leans on a “Sail” hue style the majority of the upper. It shrouds the premium leather panels that make up the quarters and perforated toe boxes along with the tongues, laces and forefoot overlays, the latter of which are made with a smooth suede. Removable Swooshes are also included with the kicks. They come in a dark navy and a forest green and are made with suede exteriors and velcro backings. Call-outs to Union LA are found through the bold yellow tabs are situated along the heels of the Swooshes as well as the right shoe’s insole that is printed with its signature Frontman logo.

Check out a look at the shoes and its special packaging in the gallery above, and look for these to drop on February 2 via Union.

For more news, the Air Jordan 11 “DMP” is expected to make a return later this year.