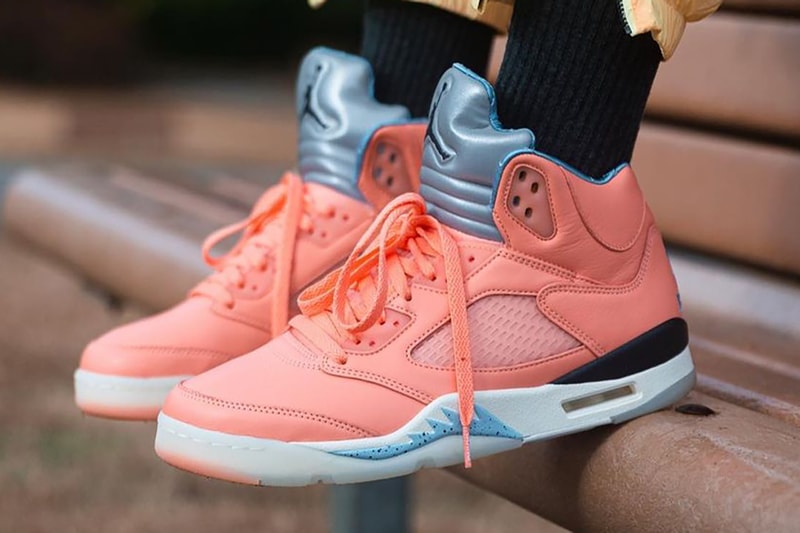 In just two days time, piping hot turkeys, honey-baked hams, macaroni & cheese, stuffing and pumpkin pies will be consumed for the annual Thanksgiving festivities, and to get in the spirit of the fall holiday, sneaker brands have also cooked up an assortment of footwear launches. Sportswear brands like Nike, Jordan Brand and adidas are in this week’s slate of best releases, but before we break these down for you let’s catch you up on last week’s headlines.

Hypebeast welcomed professional breakdancer Lee-Lou Demierre to its Sole Mates series last week to discuss his affinity for the Parra x Nike SB Dunk Low and what sneaker culture was like growing up in Amsterdam. We also took a deep dive into the differences between the Air Jordan 1 High “Lost & Found” and Air Jordan 1 Hi’ 85 and had the pleasure of sitting down with the legendary Stan Smith to chat about his new documentary.

Even without any YEEZY initiatives, adidas still managed to create buzz around its brand by debuting a Grinch-inspired Forum Low, a team-up with RIMOWA and a new adidas Rovermule Adventure colorway. Sean Wotherspoon also previewed more adidas Orketro and Gazelle collaborations. In terms other brands, norda’s latest 001 batch was unveiled, A-COLD-WALL* and ROA reunited for a second collaboration and on-foot shots of the JJJJound x New Balance 991 appeared.

Now that you’re all up to speed, scroll further down to check out this week’s top 10 releases. When you wrap up there, check out HBX to shop for more footwear styles. Release Date: November 22 (EU Release)
Release Price: $164 USD
Where to Buy: Asphalt Gold
Why You Should Cop: With only several weeks of 2022 to go, Nike is fitting in as many Air Max 1 colorways as it can to maximize its 35th anniversary celebrations. Next up for the lifestyle model is a new fall-friendly colorway that adopts the “Ugly Duckling” theme most associated with the Dunk Low pack from 2001. Earthy “Pecan” and “Yellow Ochre” hues are tossed onto the lifestyle offering and embellished with duck icons on the heels. Release Date: November 23
Release Price: $220 USD
Where to Buy: adidas
Why You Should Cop: Pharrell and adidas have been dishing out a plethora of sneakers in 2022, and the latest to be unveiled is a brand new NMD HU “Animal Pack” iteration. Uppers stick to their usual PrimeKnit builds and come fashioned with a grayscale arrangement. Smokey tints are applied to the cages and midsole blocks while the exposed BOOST cushioning on the midsoles is also dyed in a charcoal gray hue. Release Date: November 23
Release Price: $225 USD
Where to Buy: SNKRS
Why You Should Cop: James Whitner and his A Ma Maniére crew have once again impressed the sneaker community by forming a footwear collaboration that’s rooted in affecting change. Its latest luxe interpretation of the Air Jordan 4 was used to challenge US citizens to vote in the Midterm Elections, and after releasing through its in-house platform, the kicks are now getting a wider release via SNKRS this week. Release Date: November 23
Release Price: $125 USD
Where to Buy: Nike
Why You Should Cop: Momentum will not be slowing down for the Dunk anytime soon, and to close out the month of November, Nike has readied several colorways of its high-cut variation. One rendition that will be hitting the marketplace is this Nike Dunk High “Bruce Lee” makeup. Much like the Kobe 5 “Bruce Lee” colorway, this sports black and golden yellow color-blocking across its upper along with a dash of red atop the tongue branding to mimic the martial arts icon’s chest slash marks. Release Date: November 23
Release Price: $200 USD
Where to Buy: New Balance
Why You Should Cop: You’ve got to give a round of applause to Teddy Santis this year for furthering the momentum of New Balance’s Made in USA range of 990 silhouettes. His eye for creative direction has undoubtedly paid off with his expansive roll out, and it’s about to add more entries to its catalog such as this New Balance 990v3 “White/Blue ” installment. Creamy overlays are paired up with “Royal Blue” accents to form a fresh palette that Orlando Magic fans would appreciate. Release Date: November 25
Release Price: $200 USD
Where to Buy: SNKRS
Why You Should Cop: Nike’s ISPA division is known to push the envelope when it comes to crafting innovative and forward-thinking sneakers. And its latest creation to debut to the masses is the Nike ISPA Sense. Top halves of the kicks are built with a sock-like construction that is made with mesh and Flyknit materials. Bottom pieces are semi-chunky in stature and are treated with tonal design lines and a mini Swoosh on the forefoot. The silhouettes is set to drop in “Enigma Stone” and “Phantom” colorways this week.

Reebok Question Mid “On to the Next” Release Date: November 25
Release Price: $160 USD
Where to Buy: Reebok
Why You Should Cop: Allen Iverson’s signature models tend to be a heavy focus for Reebok every year, one being the Question Mid. The hoops-turned-lifestyle model is being manufactured in a fresh “On to the Next” colorway that harks back to the former point guard’s playing career with the Denver Nuggets from 2006-2009. Base layers are styled with white leathers while baby blue and golden yellow accents channel the Mile High City’s hometown squad’s team colors. Release Date: November 26
Release Price: $200 USD
Where to Buy: SNKRS
Why You Should Cop: After launching in a Georgetown-themed colorway earlier this year, the Air Jordan 6 is returning to the spotlight and being presented in a muted “Metallic Silver” colorway. If 6s are your cup of tea and you’re aiming to add an everyday type of sneaker to your rotation this might be the pair for you. Its understated in every sense of the word thanks to its black nubuck base layers and features touches of silver accents to create a subtle and timeless aesthetic. Release Date: November 26
Release Price: $155 USD
Where to Buy: SNKRS
Why You Should Cop: The Dunk High has been filtered through many different designers and brands this year, and the latest to get added to the mix is SOULGOODS. The Beijing-based imprint has prepared a Dunk High “What If” Pack that pays homage to China’s basketball community and creates colorways that interpret what Chinese skate hoops kicks would look like in the 1990s. The olive and black pair is dropping via SNKRS and represents China’s hip hop music scene. Release Date: November 28
Release Price: $200 USD
Where to Buy: SNKRS
Why You Should Cop: DJ Khaled is primarily known for composing chart-topping hits with the biggest musical talents in the world, but now he’s taken his creative abilities and applied them to the footwear space once more with his latest Air Jordan 5 capsule. The “We the Best” head honcho has cooked up a bold “Crimson Bliss” colorway whose punchy uppers are neighbored by “Leche Blue” accents Upper pods have been discarded for a slimmer fit and the “We the Best” insignia has been added to the heels.