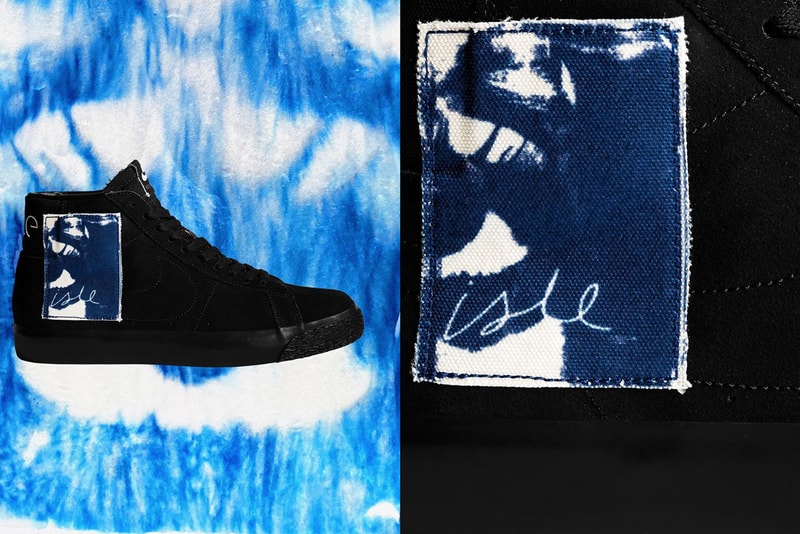 The brainchild of London skate legends Paul Shier and Nick Jensen, Isle Skateboards is known for its uniquely British vibe, something that it’s now brought to Nike SB‘s Blazer Mid. Where other recent Nike skate collaborations like the SB Dunks created by Travis Scott and Strangelove Skateboards have been planted firmly on the rambunctious side of the spectrum, Isle has opted to keep things crisp with their co-branded project — though not at the expense of inherent irreverence.

Isle’s Blazers equip a sleek full black suede upper, with everything from Swooshes to toeboxes and eyestays dressed in the stark tone. This ensures all attention is focused on the signature detail: a rough hewn tan canvas patch that wouldn’t look out of place on the outfits of legendary London punk rockers like The Clash or The Sex Pistols, printed with a blue graphic and adorned with cursive Isle text.

More elegant text motifs are present on each heel in place of a standard Nike spellout. Exposed foam tongues offer retro flair, and the Zoom Air-equipped insoles reuse the same print from the outward-facing patch for hidden detailing. Black midsoles and outsoles finalize the stylings.

The Isle Skateboards x Nike SB Blazer Mid will release on the Isle webstore come April 4. A MSRP has yet to be announced.

On the Nike Sportswear front, HYPEBEAST recently presented an Air Max Day roundtable, asking Don C, Aleali May, Ishod Wair and more about what Max meant to them.