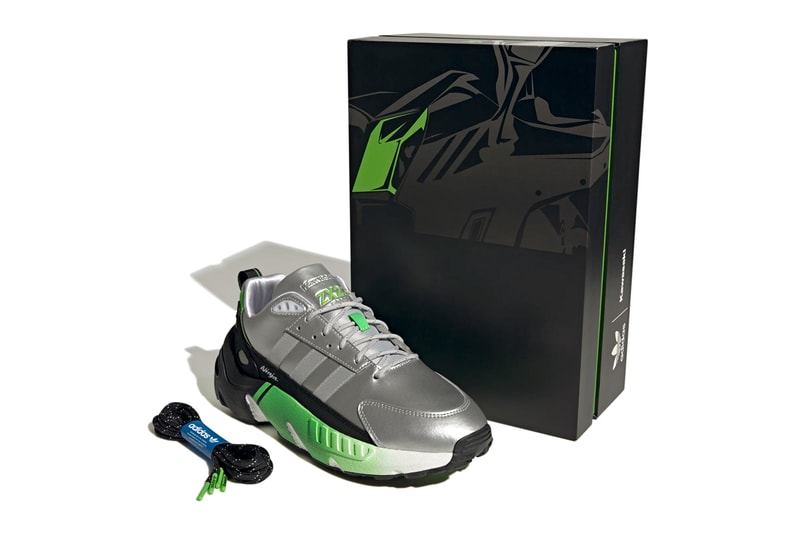 In 1984, adidas introduced its ZX line, a run of sneakers that still sees new iterations to this day. Its initial design inspiration pulled from Kawasaki motorcycles and prompted the Three Stripes to connect with the Japanese brand many years later. In continuation of the duo’s partnership, the two combed over various Kawasaki concept vehicles, landing on a prototype that encapsulates the futuristic aesthetic that they went on to replicate with this ZX22.

Pivoting to the sneaker itself, a silver upper is joined by lime green accents and contrasting black segments in typical Kawasaki Ninja style. Nodding to this, white “Ninja” text arrives at the upper’s lateral alongside co-branding on the shiny tongue. The partially reflective upper utilizes a synthetic build backed by a textile lining in a matching silver. As for the sizable sole unit, ample BOOST cushioning is joined by a black rubber outsole and accompanying framework that is standard on the ZX22. A collaborative box, black laces with lime green aglets and material composition partially sourced with recycled materials completes this street-ready look.

Release for the Kawasaki x adidas ZX22 is scheduled to take place November 24 at 3am EST via adidas at a price of $150 USD.

Take a look at the pair above and for more footwear news, Philllllthy’s adidas NMD S1 is scheduled to finally hit shelves after being officially revealed by the Three Stripes.