Nike Air VaporMax 360 Gets Spruced Up in “Varsity Royal” 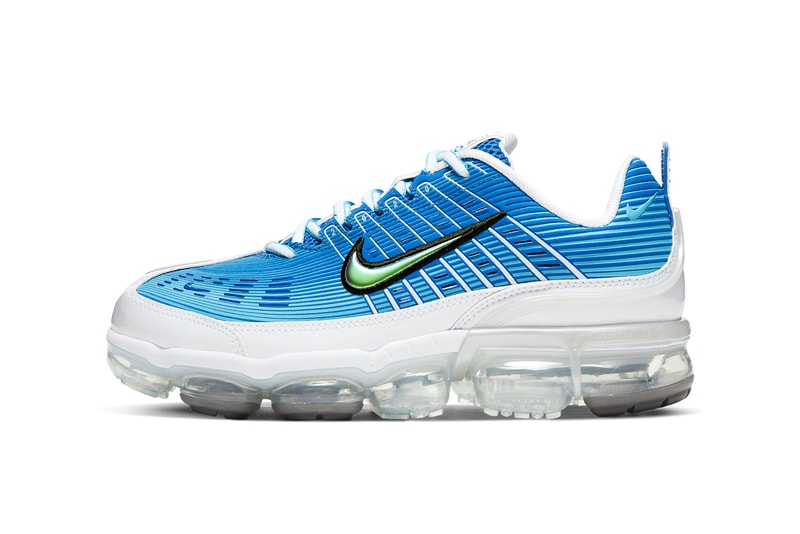 Nike‘s Air VaporMax 360 is still going strong post Air Max Day, and for its latest effort it’s been spruced up in a new “Varsity Royal” colorway. One of the most vivid styles that’s been seen from the hybrid silhouette during its short time on the market, “Varsity Royal” uses blue fades and shades to serenade its original inspiration: 2006’s influential Air Max 360.

Textured uppers are dressed in both “Varsity Royal” and “Blue Fury,” with ridged construction and swooping design lines alternating between both colors for a compelling gradient-style effect. Iridescent green Swooshes pop off this blue base both literally and figuratively, and are surrounded by thick black trim. All of this sits above a full-length white patent leather mudguard, which reaches up onto the toebox, throat and heel tab.

More nods to the Air Max 360 appear on the tongue and eyestays by way of VapaorMax 360 text branding and a “2020” hit spread across four lace holes. Down below, white Cushlon foam and gray TPU plastic cages separate the crystal clear VaporMax cushioning unit from the upper to complete the look.

The Nike Air VaporMax 360 “Varsity Royal” is available on the Nike webstore now, retailing for $225 USD.

For more from Nike Sportswear, have a gander at the Air Metal Max — a ’90s cross trainer that’s back for the first time in two decades — in a “Neptune Green” colorway.