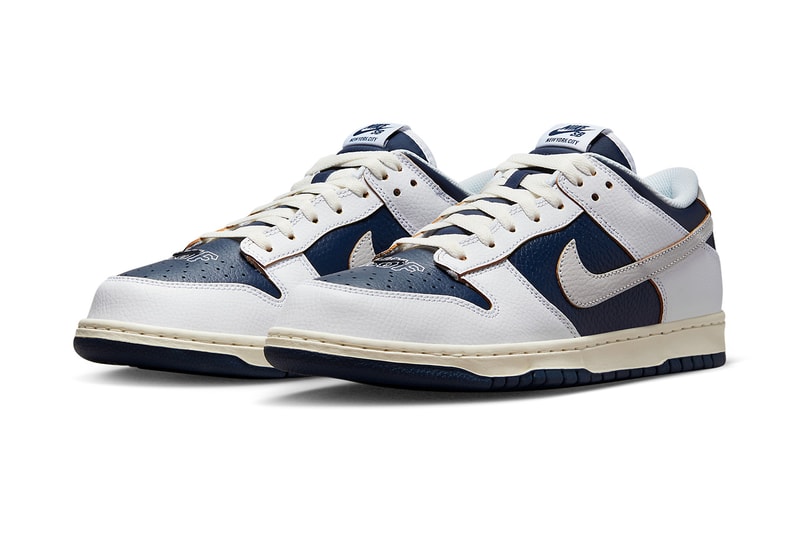 Nike and its SB label still have a mélange of collaborations to get through before 2022 comes to a close, but it is without a doubt that one of its most heartfelt ones will be its Dunk Low capsule with HUF. The California streetwear brand’s forthcoming project is a love letter to its beloved and late founder Keith Hufnagel — who tragically passed away in 2020 due to brain cancer. The collection is made up of three colorways: one that’s devoted to New York City, another that calls out San Francisco as well as a friends and family colorway that nods to both. The former has just been unveiled by way of official imagery.

Yankees colors are the most obvious Big Apple salute on this iteration as the leather uppers alternate between dark navy and white panels. And from there, striking details are dispersed to various parts of the base. Toe boxes are adorned with HUF branding and stacked below a Swoosh charm. The heels are etched with NYC’s older skyline that features the Statue of Liberty and the World Trade Center’s twin towers, and the words “Keith Forever” are split between each shoe. Quarter panels can be deconstructed as they hide a tie-dye pattern which is designed to nod to its nostalgic SB Dunk High collaboration from 2004. Furthermore, the insoles are dripped in HUF’s signature green hue that come with HUF branding and dog silhouettes, and the dust bag that the kicks come packaged are printed with the trio of colorways in the range.

A release is likely going down sometime during the Fall season, but this has yet to be confirmed.

For other news, the AMBUSH x Nike Air Adjust Force “Summit White/Black” and “Black/Psychic Purple” release dates have been announced.